Nice to meet you!

Where We Came From 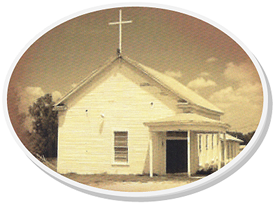 Pleasant Valley United Methodist Church in Sachse, Texas celebrated its 150th anniversary in 2012. We are proud of our history of serving God throughout the years and share this history with you so you can see the heritage of who we are today. As early as 1852, a group of neighbors were said to gather in the Pleasant Valley community to worship God. They were served by a traveling preacher who could sometimes get to the area only every three months or so. From this early group of worshippers, the Methodist church was chartered with the Methodist Episcopal South Conference in 1862.

Pleasant Valley was a thriving area. It received a post office in 1876 with T.J. McClain as postmaster. By 1884, it had three steam gristmills and cotton gins, three general stores, a druggist, a school, a doctor and a population of 60.

In 1872, Elizabeth Maxwell donated three acres of land to the Pleasant Valley community to erect a church house. The church was built on what is now part of the Pleasant Valley cemetery and served as a meeting place for various sacred and social events. This first community building was turned over to the Cumberland Presbyterians and moved around 1904 and served as a barn until it was torn down about 1935.

In 1884, Dr. and Mrs. J.H. Armstrong donated one-half acre of land upon which the first Methodist-Episcopal Church was built. Nothing is known about the first structure built on the site in 1886. In 1893, however, a wood frame building with a steep roof, high beaded ceilings, pine floors and walls, three rows of pews, two front doors and windows along the side was erected. Coal was burned for heat in the winter and hand fans imprinted with “Dyer Brothers Drug Store” were used in the summer. A dedicated member, Bob Merritt, came to the church early for some 50 years to light the fires to heat the building before others arrived.

In 1913, the Presbyterians built their church diagonally behind the Methodist church. With two rows of pews, it was smaller than the Methodist structure. But the population of Pleasant Valley had started to decline when the railroads bypassed the town. Pleasant Valley lost its post office in 1905. The Presbyterians ceased worshipping in their building in the 1930s, due to dwindling attendance. The Methodists believed that the Presbyterian building was more suitable and less costly to maintain, so they bought it. To move the Presbyterian building to the Methodist site, Virgil Ramsey was paid $50 for the use of his house-moving equipment. Labor was furnished by the local men, including Jack McClain and Garth McCallum who worked during some very hot days in 1938 to move the building to our present site.

In 1961, the second parcel of land (three-quarters of an acre) was donated to the church by Nell Williamson in memory of her parents, Numa P. and Jessie Shugart Harris who had lived on the site for many years. In 1969, the church bought small parcels of land from the Pleasant Valley Cemetery Association and J.E. and Greta Newman, and in 2009 Jack McClain and Carla McClain donated the one-half acre of land where the old Pleasant Valley Store used to stand. This completed our 2.3 acre tract, at least until this year when road widening for Merritt and Pleasant Valley roads will take a right-of-way, leaving us with just a little less than two acres.

The building we are in today was built in 1997. Sadly, the old wooden building was riddled with termites and could not be saved.

We look back and honor our heritage, but we also look forward to a bright future for this church which has survived so much and still exists to serve God and connect others to Him.